The automation of tasks and operations that make up a workflow.

There are several instances where workflow automation can improve efficiency. When performing the same set of tasks, we can automate it. Let’s look at some examples.

I don’t like any files on my Desktop. Instead of having to move them by hand, I automate it using Hazel. I have a rule to move any files added to the Desktop to another folder. From that folder, I’ll move those files, after a certain period of time, to another folder for filing.

Hazel is powerful, and it’s one of the applications I use for workflow automation.

I’ll be talking about Hazel in a future workflow automation article.

Every so often, I’ll need to view the current link in an Incognito Window in Google Chrome. Without automation, the process looks like this:

Using Keyboard Maestro, I automate the process, mapping a macro to the alt+shift+W keyboard shortcut. 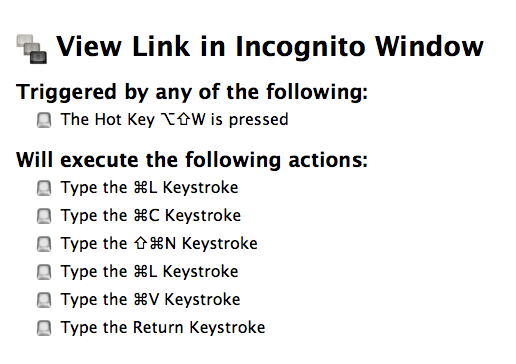 That is a small example of what Keyboard Maestro can do. I’ll be talking about the application more in depth in a later article.

When I’m working on the command line, I reference URLs on GitHub. Right now, to get to the Pull Request for the current branch, the workflow looks like this:

With a bin script, we can automate the workflow:

Wait! What’s a “bin script”? I’m going to discuss bin scripts in my next article. For now, just know they’re a set of commands that can run on the command line to perform a task.

If you’re curious about the bin script, you can view it in my dotfiles.

These sorts of automation steps may seem overkill, but I promise that the time adds up. These small workflow alterations can add up to hours, days, or even months of time saved. Once you train yourself, muscle memory will kick in, and you’ll work in a more efficient manner without realizing it.

Determining when and where to use it

So how do we know when and where to set up the automation? There’s no full-proof method, but keeping a running list helps. Create a note file that you can access, and use it to write down repetitive tasks. If you notice yourself doing the same thing over and over, write it down. You don’t have to solve it at that moment, but a running list helps.

I tend to go to the extreme to automate everything, but do it within reason. There are always areas to improve efficiency. You just have to start looking.

In the next article

In the next article, I’m going to talk about bin scripts. If you read my 5 Command Line Productivity Tips, it will be a great primer to the next article. As always, ping me on Twitter and let me know what you think!