“A habit is a routine of behavior that is repeated regularly and tends to occur subconsciously.” — Wikipedia

As a starting point, let’s break down this definition of a “habit.”

“…a routine of behavior”

A habit, firstly, is something that you do — it’s a behavior, action, activity, etc. Some examples of habits that you are most likely familiar with are:

“that is repeated regularly…”

While it might be implied by the previous list — and even the definition of the word “routine” — habits are repeated regularly. For example, brushing your teeth every morning and every night is a habit because it is both a “routine of behavior” and “repeated regularly.” 😬

“and tends to occur subconsciously…”

When a habit is formed in the brain, our brains go into a form of autopilot, allowing us to perform a repetitive task with hardly any cognitive overhead.

Based on this knowledge, I hope it’s clear why habits are such an essential part of productivity.

As Charles Duhigg explains in “The Power of Habit“, a habit has three primary parts: 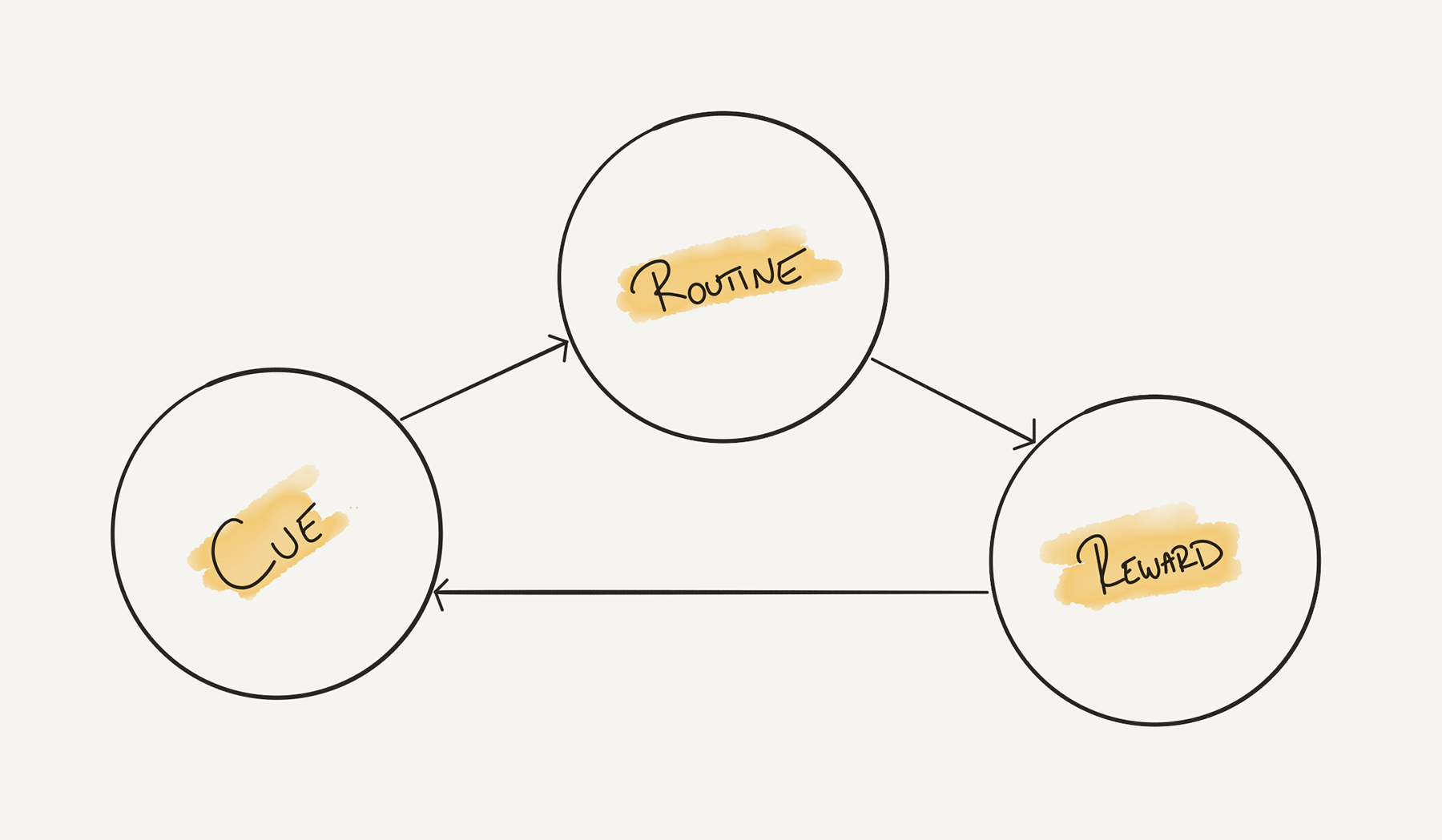 Now that we know the formula for habits, we can see how we might build new habits, or even change existing habits (more on that in a bit).

So let’s look at an example and work through it together.

I want to build a habit of meditating on a daily basis.

How can we apply the formula for habits to establish this new habit?

What is the cue?

First, we define the cue. What is the cue or trigger to initiate the habit?

It doesn’t matter what the cue is. What matters is that it’s consistent, and it’s specific enough to register (for you) that it’s time for the habit. I personally like to try and tie a new habit to an existing habit in some way.

I make coffee every afternoon at 12:30pm. The cue is time (and usually a working timer or calendar event). I could hook into this habit to trigger the new meditation habit. But I’d rather meditate before having coffee, so I’m thinking meditation takes the coffee’s cue. We’ll talk about another benefit of this change in a bit.

At 12:30pm every day, I meditate. The cue is a calendar-event reminder.

What is the reward?

We’re skipping over the second part of the habit loop because it’s simply performing the routine itself — in this case, meditating.

Since I’m going to now have coffee after meditation, guess what the reward for meditation is? Coffee! Oh, and increased focus, relaxation, and improved brain health. I guess that’s cool, too.

Not all habits are good habits. In fact, a lot of habits are bad. Well, maybe “bad” is the wrong word for some of them. Let’s approach them as a habit to be replaced by a better, healthier, and more productive habit.

Much like the previous example where I altered my coffee habit to accommodate a new meditation habit, we can play around with the same formula to change already-established habits.

I want to change my habit of looking at my phone as soon as I wake up.

I believe — and I’ve read a lot of information solidifying the idea — that immediately looking at your phone when you wake up is a bad habit. It can wait until you’ve woken up, gotten ready, eaten breakfast, and begun work for the day. I feel the urge, and perform the instinctual behavior to perform this habit anyways. So how can I break it?

Let’s look at the pattern.

What is the cue?

Waking up when the alarm goes off.

What is the routine?

Grabbing my phone on the nightstand and launching apps.

What is the reward?

Catching up on emails, tweets, and news, feeling connected to the world and to the work I’m going to start later in the day.

To change this habit, I can just replace the routine and the reward while keeping the same cue.

What is the new routine?

Instead of grabbing my phone, I will immediately get up and get ready for the day.

What is the new reward?

Time. Time is our most valuable resource, so I believe it’s an incredibly valuable reward. And guess what? Later in the day when we decide to accommodate our new meditation habit, we’ll have an extra ten minutes or so.

Once you get used to the new habit — consistently instilling the new pattern of behavior — the same automatic response will kick in. Before no time, you’ll be adapted to the new, healthier, more productive habit.

The final component of habits I want to cover is keeping track of them. Like most things in life, we can’t improve until we determine the current state. The same applies here; it’s important to take inventory of existing habits. Also, the same system can be used to visualize what habits to change, potential new habits, and so on and so forth.

Like an alarming number of situations, it ended up in building out a spreadsheet. In the spreadsheet, I can list out:

This works well for me, but that’s not to say it is the perfect setup for you. I’m a highly routinized person, so a simple spreadsheet inventory for my habits suffices. However, there are a lot of applications out there made specifically for tracking your habits (Streaks, for example). Find the method that best helps you catalog, evaluate, and modify your habits.

Understanding how habits (and our brains) work allows us to build healthier, more productive lifestyles that give back time rather than take it away.

If you’re interested in hearing more, sign up for my “newsletter”. I will shoot you an email when the next guide goes live. No spam.